Q: WHAT IS DNA? PART 4: HOW TO RECOGNIZE A FAKE RESULT OR REPORT

A: Unfortunately, there are unscrupulous individuals who sell fake DNA tests, and as people don’t buy a DNA test every day, it can be hard to know what to look for when choosing a DNA laboratory, or how to tell if the results are real.

Do not fall victim to these scams; start by knowing the basics of DNA testing and request sample reports from the laboratory. They should be able to explain to you in detail about every scientific term and figure shown in a report. In this section, we describe details of fake reports that we have come across.

You will NEVER find a paternity report with more than one Alleged Father and one Child. In the event that a Mother is also involved in the Paternity test (as explained in PART 3: Understanding a PTC Paternity Test Report), then you will see not more than one Mother’s DNA profile also featured on the report, however there will not be a Maternity Index given.

Example 1:
One (1) Alleged Father and three (3) Children and one (1) Known Mother = three (3) separate paternity reports will be issued.

Below is an example of a fake report. Having two children on the one report is a clear sign that this is a fake report (circled in green). 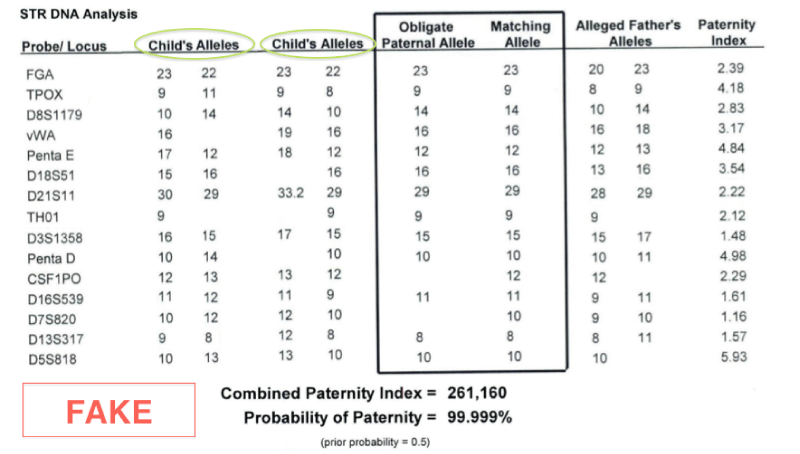 Below is another example of a fake report. How many mistakes can you see? 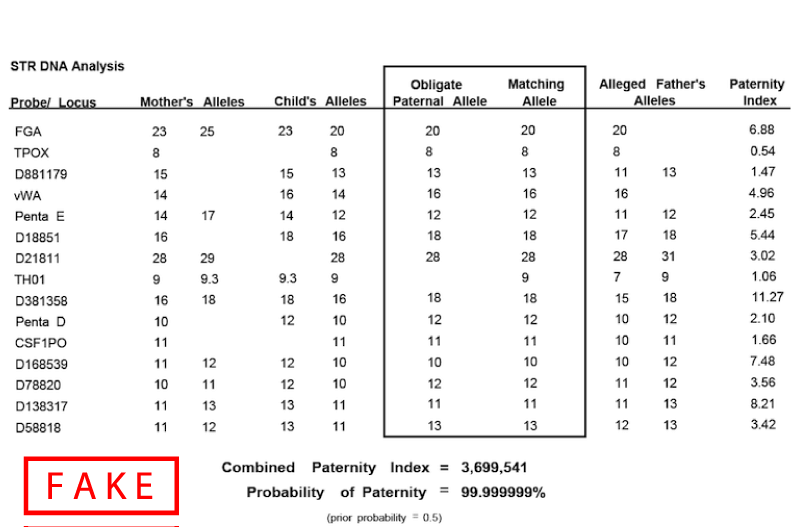 ERRORS IN THE FAKE PATERNITY REPORT ABOVE:

There are many cases of fraud that go unreported simply because of the sensitive nature of this type of DNA test, or because people don’t really understand what they’re looking at when they see a paternity report. If you think that you have been issued a fake DNA paternity test report, you may contact us at PTC Laboratories Thailand for advice. We are always willing to help,

FOR MORE IN OUR SERIES ABOUT HUMAN DNA & PATERNITY TEST REPORTS:
PART 1: Human DNA – The Scientific Basics
PART 2: Human DNA & How it Identifies Us
PART 3: Understanding a PTC Paternity Test Report
PART 4: How to Recognize a Fake Result or Report