A: A Paternity Test report from PTC Laboratories shows the DNA profiles of ONE Alleged Father and ONE Child being tested. If the Mother of the Child provides her samples, her profile will be shown as well, however the report will not state the Maternity Index.

Below is an example of a report where Mother, Child, and Alleged Father have all provided samples: 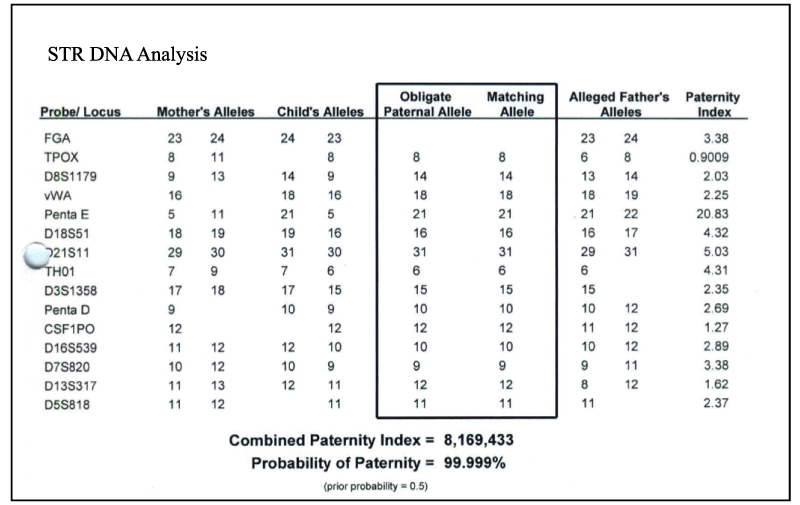 To illustrate, you can see by the figures in the purple box in the table above, that the Mother’s alleles at locus Penta E are 5, 11 and the Child’s alleles are 21, 5. Remember, a Child inherits one exact copy of each chromosome from Mother and the other from the Father. This means that Child’s allele 21 at locus Penta E must have been inherited from the unknown Father, because the known Mother does not have allele 21. This makes allele 21 the Obligate Paternal Allele.

Referring to the green box in the table above, the Mother’s alleles at locus FGA are 23, 24 and the Child’s alleles are the same. Either allele could have come from the Mother, so there is no Obligate Paternity Allele. Referring to the red box in the table above, the Child’s allele at locus TPOX is 8. This means the Child inherited allele 8 from both the Mother and the Father. Therefore, the Obligate Paternal Allele must be 8.

This leaves us with the values in the Matching Allele column. These are obtained by comparing alleles of each locus from the Obligate Paternal Allele and the Alleged Father’s Alleles columns.

It is important to note, that if the Mother does not provide her samples (hence no profile available), it sometimes not possible to deduce the Obligate Paternal Allele. This reduces the Paternity Index and can increase the amount of time it takes to reach a conclusive result. This is why we recommend to include the Mother’s DNA in a Paternity test whenever possible.

The last column of the result table is the Paternity Index (PI). The formula for this is:

Y = frequency a specific allele occurs within a population of the same ethnicity, in a specific geographical region

Most countries have compiled anonymous genetic information of humans, plants, and animals into special databases that are used by genetic testing laboratories around the world. These databases are created using standard techniques by scientists and students from colleges/universities, government, and private organizations. Part of these databases is used for human identification – frequencies of alleles occurring within a population of the same ethnicity, in a specific geographical region. The main unit that researches and publishes data for allele frequencies in the Thai population is the Faculty of Medicine, Ramathibodi Hospital.

Sometimes a Child’s alleles will not match either or both of the alleles that should have been inherited from either parent. This is called a ‘mutation’. It is very rare and usually easy to spot a mutation because most alleles of the remaining loci will show a match. When this happens, the PI cannot be zero. Each gene has a specific mutation rate, and this rate is used in the calculation of the PI for that locus – the PI is usually a small fraction. If both alleles of the Alleged Father do not match the Child’s alleles at three or more loci, we assume that none of the alleles are mutations. The PI for each of them is zero.

Refer to locus FGA in the example report. You will notice that all three individuals have alleles 23 and 24. Also notice that there are no values in the Obligate Paternal Allele or Matching Allele columns. A PI can still be calculated from this.

The Combined Paternity Index (CPI) is the likelihood that a tested individual is the biological Father. It is calculated as the product of all the Paternity Indices, i.e. multiplying all values in the Paternity Index column. In our example report, the CPI is 8,169,433. This indicates that the Alleged Father is 8,169,433 times more likely to be the Father if compared to a random, unrelated, and untested man from the same population. The higher the CPI, the more accurate are the result.

The Probability of Paternity is the probability that a tested individual is the biological Father as compared to a random, unrelated, and untested man from the same population.

where:
CPI = Combined Paternity Index
Prior = Prior Probability

At PTC Laboratories, we guarantee a minimum Probability of Paternity of 99.99% for every standard Paternity test, both Legal and Peace-of-Mind; whether the Mother is included or not; and despite whether mutations are found. We believe that every client has the right to the highest quality DNA testing when facing what may sometimes be a life-changing situation.

FOR MORE IN OUR SERIES ABOUT HUMAN DNA & PATERNITY TEST REPORTS:
PART 1: Human DNA – The Scientific Basics
PART 2: Human DNA & How it Identifies Us
PART 3: Understanding a PTC Paternity Test Report
PART 4: How to Recognize a Fake Result or Report